How to Reduce Training Data with Self-Supervised Learning

Deep Neural Networks such as Deep CNNs are excellent feature extractors. That's why they have gained a top spot in many visual tasks. Visual Transformers (ViT) are pushing the limits even further. However, their success is largely attributed to Supervised Learning and the immense amount of training data from datasets like ImageNet, Places, Kinetics, etc.

However, collection and annotation of large-scale Image/Video datasets are very time-consuming and quite expensive, not to mention that there is not often enough unlabelled material to annotate (e.g., Medical Imaging). As a reference, the Places dataset consists of 2.5 million labeled images, ImageNet 1.3 million. At the same time, Kinetics is a labeled video dataset comprising around 500K videos, each with a duration of about 10 seconds.

What is Self-Supervised Learning?

Simply put, Self-Supervised Learning refers to learning methods in Machine Learning that make use of automatically generated labels that originate from large unlabelled datasets. It offers very good performance without the need for large labelled datasets.

Before we explain how Self-Supervised Learning (SSL) works and how you can leverage it to reduce the training data, it's best to explain some key concepts.

Now that we have introduced the core concepts, let's combine them to understand the Self-Supervised Learning workflow. Figure 1 offers a visual illustration. Very briefly, SSL aims at transforming an unsupervised task into a supervised task (pretext task) through automatically generated labels (pseudo-labels). Then it transfers the knowledge acquired from the pretext task to solve the final task (downstream task).

Assume an Encoder model (CNN, ViT) has already been designed. Also, let's assume that we have a large image dataset at our disposal, with only a small percentage of it annotated. We begin by choosing a pretext task, such as recreating occluded parts, solving a Jigsaw puzzle, and rotation classification. Once we pick a pretext task, data augmentation takes place. This data augmentation serves a different purpose than supervised learning tasks. Here, augmentation aims to map an image into different views via stochastic transformations to create the pretext task. For example, for the pretext task of image recreation (inpainting), augmentation will randomly mask other parts of the image, and the Encoder aims to recreate these occluded parts. Pseudo-labels are created through this augmentation automatically.

This data augmentation process encourages the network to learn hidden representations through solving the pretext task. Augmentations of the same input have more similar latent representations compared to other inputs, helping the Encoder discover the dominant features.

Moving on, the Encoder is trained on the pretext task, which is usually quite different from the downstream task. If the Encoder successfully solves the pretext task, it must have learned to extract the essential features from the images and avoid paying much attention to the noise. Otherwise, it wouldn't be able to solve these complicated tasks. However, the complexity of the data augmentation, or pretext task, must challenge the model. Otherwise, if the model solves the task very quickly, it might not have been learned, and the complexity may be low.

Once the Encoder successfully solves the pretext task with sufficient accuracy, its parameters are used as an initialization for the network that aims to solve the downstream task. Adding more layers on top of the encoder part is not unusual, which are trained solely using supervised learning. During the downstream task training, the labeled portion of the dataset is used. Hence, the network now relies on traditional supervised training to solve the final task.

Essentially, we transfer the knowledge acquired during the pretext task training down to the downstream task, similar to the well-known Transfer Learning technique but with some important differences.

How To Reduce Training Data Via Self-Supervision

Let's recreate a similar real-world case study. You, as an ML engineer, have been asked to create a semantic segmentation computer vision model to identify certain microorganisms in microscopy images. The scientists have provided you with 3000 images of unlabeled data. You explain that to solve the problem efficiently, you need annotated data. They argue that this is a quite time-consuming and expensive activity, since domain experts must spend time on the task. They suggest that annotating 500 images will require around one month.

So, to speed up the deployment of the model, you accept to move on with 500 images at first. You suspect that 500 images will not be enough for supervised training. You try it, and indeed, the model achieved a low performance with visible signs of overfitting that are not solved with regularization methods. Then, you search for pre-trained models on a similar dataset but fail to find something relatable to the architectures that you plan to test, so Transfer Learning is not a good option. This way, everything naturally leads to Self-Supervised Learning. Now, you can leverage the 500 annotated images (except the test set, of course) and the remaining 2500 unlabeled images.

Not only can you design a more accurate model with much less training data, but you can later deploy this model as an annotation assistant to the scientists to speed up the labeling process of the remaining images. If your annotated dataset becomes quite large, at some point, you can retrain the model with Supervised Learning to further increase accuracy. Feedback loops will also provide another means of increasing accuracy even more.

Both techniques rely on knowledge transfer through parameter initialization and are excellent ways to reduce the amount of training data needed. However, they also share some significant differences.

Depending on the use case, you may want to pick one over the other. To help you decide which one is best, some research insights are: 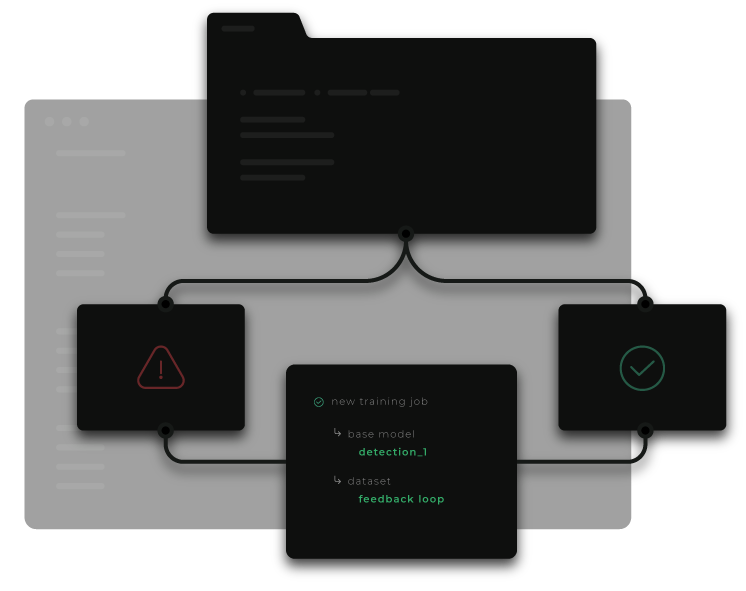 How We Built A Dataset Visual Similarity Search Feature

Learn how we built a dataset visual similarity search feature with embeddings and Qdrant.

In computer vision high-quality training data doesn't ensure high-performing production models. The work begins after deployment, and monitoring is a must.